Staying informed about what’s going on upriver may change the way you look at the Mississippi’s bulging water this time of year.

Staying informed about what’s going on upriver may change the way you look at the Mississippi’s bulging water this time of year.

Midwesterners are dealing with a devastating flooding disaster and have begun the long process of recovery. Now, they struggle with the decision about whether to find higher ground. Check out this New York Times article about the devastation.

A levee breached by the Missouri River near Fortescue, Mo.CreditCredit

By Mitch Smith and John Schwartz

CORNING, Mo. — The widespread, severe flooding in the Midwest over the last month has exposed the vulnerabilities in a levee systemthat is now so full of holes that many here ruefully describe it as “Swiss cheese.”

With dozens of costly breaks across Nebraska, Iowa, Missouri and nearby states, the surging waters have left large areas without even cursory flood protection.

“Breaches everywhere: multiple, multiple breaches,” said Tom Bullock, the top elected official in Holt County, Mo., where crews were rushing last week to patch a leaking levee that, if it failed completely, would flood the small town of Fortescue.

And with the fear of more floods in the coming years — and perhaps even the coming weeks — many people said living and farming near the water might not be viable much longer without major changes.

“We can’t keep this up and make a living,” Michael Peters, who grows corn and soybeans on fertile bottomland in northwest Missouri, said last week after trying to find a path to his submerged farm in a motorboat.

On the river-specked Midwestern prairie, the thousands of miles of levees are an insurance policy against nature’s whims that, at their best, keep cropland and towns dry, floodwaters at bay and the agriculture-driven economy churning. But the levees are aging, subject to uneven regulation and, in many cases, never designed to withstand the river levels seen in the last decade. 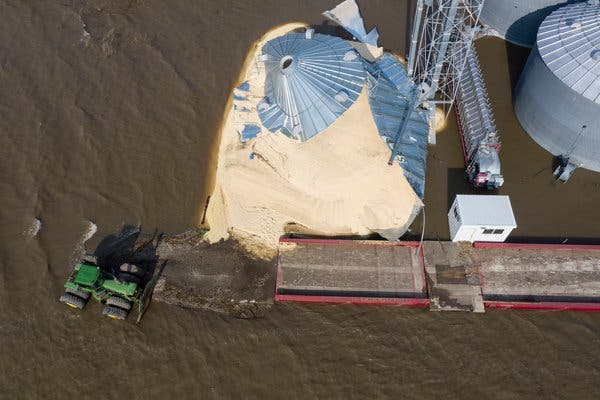 Roger Ideker at the road to his farm in Holt County, Mo. Mr. Ideker was the lead plaintiff in a lawsuit against the Army Corps of Engineers that claimed the repeated floods amounted to a seizure of their property. 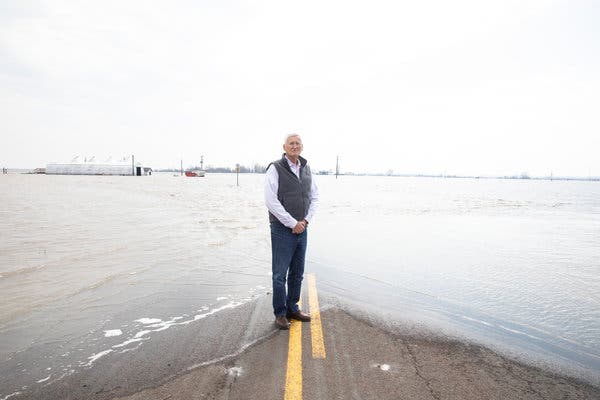 The recent flooding — which has devastated farms, roads and Native American reservations — has pushed to the foreground a debate that has raged quietly for generations. It boils down to this: How should the rivers be controlled, who should make those decisions and how much protection should be given to those most vulnerable?

Many of the levees, usually earthen and topped with grass, were built by farmers decades ago and are now managed by a patchwork of local government agencies known as levee districts that often do not coordinate or even follow the same rules. With increased flooding in the past few years, the levees are being tested more frequently than ever before, straining the finances and expertise of some of those districts.

The levee situation has become so grave that the American Society of Civil Engineers gave the country’s levee system a D grade in 2017, suggesting $80 billion in investment over 10 years.

“When the next one comes along bigger, they either fail or are overtopped again,” said Nicholas Pinter, an expert on rivers and flooding at the University of California, Davis.

According to the United States Army Corps of Engineers, which oversees infrastructure on the Missouri River and some of its tributaries, at least 62 levees had been breached or overtopped in the Midwest in March, and hundreds of miles of levees had sustained damage.

“When they run water over the top of them, there’s not anything you can do,” said Pat Sheldon, the president of a rural levee district in southwest Iowa that was still paying off repairs from the 2011 flood. This time, Mr. Sheldon said, the damage to the levees was much worse, perhaps in the hundreds of millions of dollars. “It’s terrible,” said Mr. Sheldon, whose farm was also cut off by the water.

In Missouri, Mr. Bullock pointed out a levee that last week had been split open and consumed by the river. A large log swirled in the water near where the earthen berm should have been. “I don’t know what we’re going to do this time,” he said.

The Army Corps of Engineers, which helps determine water levels by operating a series of dams on the Missouri River, tries to balance the needs of many who use the rivers it manages, including farmers, barge shippers, endangered animal species and people who use the water for recreation. Those interests are sometimes at odds, and have been the subject of decades of litigation. Corps officials say they are not allowed to change the congressionally authorized purposes of the reservoirs, though they had been most focused on limiting floods for the past year.

“The Corps’s No. 1 priority in its operations is life safety,” said Maj. Gen. Scott A. Spellmon, the Corps’s deputy commanding general for civil and emergency operations, in a statement. “Our current focus is to protect life, mitigate risks to flooding events and repair damages due to the recent events in the basin.”

In places like Holt County, where the floods keep coming and the levees keep breaking, there is little patience for the Corps’s approach. Last year, landowners from four Midwestern states won a lawsuit against the agency that claimed the repeated floods amounted to a seizure of their property.

“We’re ground zero: We get the full shot,” said Roger Ideker, whose family owns farmland in Holt County along the banks of the Missouri River and was the lead plaintiff in that lawsuit.

This week, the closest Mr. Ideker could get to his land was a two-lane road a few miles away that was now functioning as a boat ramp. Buildings in the small town of Corning were visible half-submerged in the distance.

“Our levees are big and they’re good,” Mr. Ideker said, but they were no match for this new normal. “Every event seems like it’s higher. It’s higher water. You build the levee higher. And the next time you build it higher. You can’t keep up with it.”

The situation has been exacerbated by wetter rainstorms, which are expected to worsen over time and have been attributed to climate change.

“There are layers that come together when big events like this happen — it’s never just one thing,” said Barbara Mayes Boustead, a meteorologist with the National Weather Service who contributed to a 2018 federal report on climate change.

Tom Waters, the chairman of the Missouri Levee and Drainage District Association, which advocates for landowners and others along the rivers, called for easing federal regulations and building bigger flood protection in rural areas.

“We’re seeing more water in the river, but we haven’t improved the infrastructure,” said Mr. Waters, who farms along the Missouri River east of Kansas City, Mo. “Basically, when it comes to levees and flood control protection, we’re still driving on gravel roads and we’re trying to handle interstate traffic.”

But building ever-higher levees is not a panacea: Keeping water out of one area only means it will go somewhere else.

In the early 20th century, the Army Corps of Engineers and towns along the Mississippi River followed a “levees only” policy that meant building higher and higher walls, leaving the river no way to release its power. That strategy failed spectacularly in the Great Flood of 1927, which inundated 27,000 square miles and displaced one million people. In the aftermath, officials built a more complex Mississippi River system that included a network of spillways and flood ways, as well as other tools, along with the levees.

In the areas hardest hit this past month, where levees are shredded and livelihoods shattered, many blame the Corps. In recent weeks, politicians from some of the flooded states have become vocal critics of the river management plan and called for the prioritization of flood control.

Senator Josh Hawley, Republican of Missouri, said in a statement that the Corps was “hamstrung” by “radical environmentalist lobbyists that are forcing the agency to prioritize wildlife over farmers.” Senator Chuck Grassley, Republican of Iowa, cited the town of Hamburg in his state, which staved off the river in 2011 by bolstering its levee but flooded this year after trying and failing to keep its increased protection.

“The No. 1 priority of the Corps should be flood control — flood control, period,” Mr. Grassley said on the Senate floor.

The devastation to the levees has left much of the Midwest with nothing to hold back the waters from even a relatively minor flood, which forecasters have warned is possible in the weeks ahead. 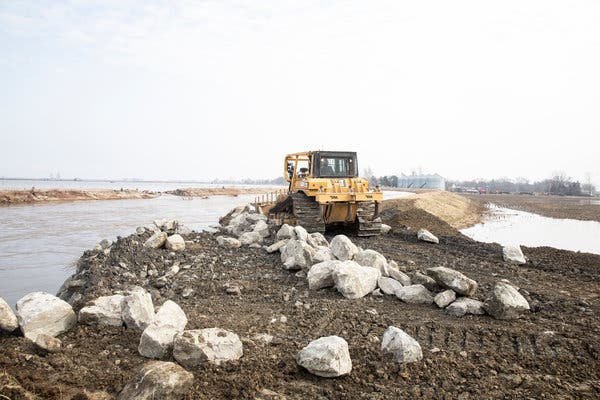 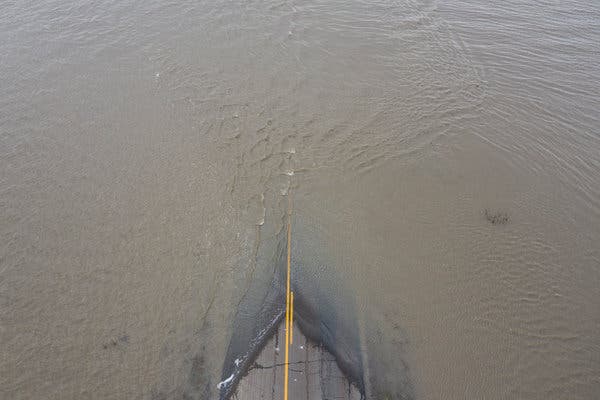 “If we have a wet spring,” Gov. Mike Parson of Missouri said in an interview, “this problem is going to get worse, and in that process we’re not going to have time probably to repair these levees.”

As water recedes, at least for the moment, and the conversation shifts to recovery, many in the river bottom said they planned to stay and rebuild, hopeful that policies might change. Others said these levee breaks were probably their last.

“It’s not that I don’t want to be here,” said Rhonda Hunziger, the mayor of Craig, Mo., population 230, where residents piled sandbags through the night in a spirited but futile attempt to save their town from the Missouri River after surrounding levees burst.

Depending on what the insurance company decided, Ms. Hunziger said this could be the flood that forced her to higher ground. “I have lived with floods my whole life,” she said while staring out at the brown-hued water covering her nearly empty town. “And I am about ready to get off the bottom.”